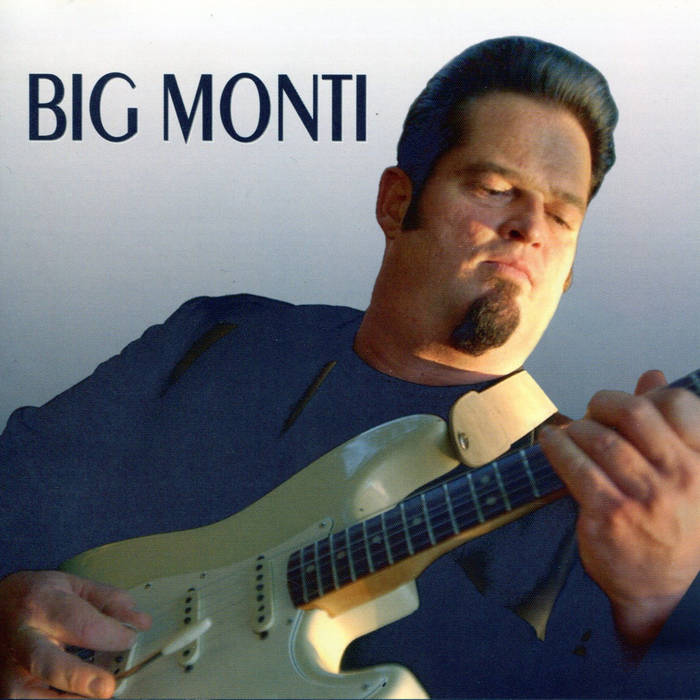 BIG MONTI is part of a 4-CD set called "The Songwriter" but is available separately as well.

It's like this: One day in Portland I ran into Billy Triplett on the street. He was on his way to The Roseland where he was mixing a band that night. He'd been living in Orange County and I hadn't seen him in awhile. He didn't look very good and come to find out his sister had just died. So we got together the next day to do some catching-up.

I'd just lost somebody too and we were both feeling finite - like we should do something with the time we had left. There were some hard feelings left over from the last project we did together (The Obvious Rock) and we agreed it was time for getting over it.

So we decided to make another record together - make things right. Basic tracks were recorded at my house. Then I'd fly down to Billy's to do some overdubs. There was no big rush. My career had been stalled for some time now and there weren't any record companies beating down my door.

Billy was having a hard time of it and I offered him a place to stay until he got back on his feet again. He moved in and we went to work. Still no rush, no pressure. The only problem is Billy and I both got a thing for alcohol.

To say that Billy Triplett can drink a lot is a spectacular understatement. In Amsterdam I watched him drink The Hell's Angels (Holland Chapter) under the table in their own club. With me it's drinking or not drinking. I'm not a glass of wine for dinner kind of guy. I'm a fifth of vodka kind of guy. Billy likes to party - I just don't want to feel anything. Sometimes we're not so good together.

Billy had been living with me for several months when he learned of his brother's death. Man, I don't know what's going on in the universe to rain down so much pain on one man - but he snapped. A couple days later he moved out and I didn't see him again for months.

I was fighting demons of my own so I put the recording project on the shelf. For months I didn't even want to think about it. One night I rented a movie called "Heart of Darkness", a movie about the making of the movie "Apocalypse Now". I strongly recommend this movie to anyone who is struggling with an artistic endeavor of any kind. It gave me the courage to dust the tapes off and get back to work.

Enter Steve Branson. Billy, Steve and I go way back and it was an obvious choice to have Steve help me finish the album. He wasn't happy with the sound quality of the vocals so we did them all over again. You singers out there know how much work is involved to record vocals for an entire album. Well, imagine doing it twice. There was a lot of work to do and it took several months to finish.

Years later? I love this album. This is by far my favorite body of work - and I won't spend another second thinking about how hard it was to make. It doesn't matter now. I just like the fact that this album exists.

The Stevie Ray Vaughan box can be a tough one to break free from, but "Big Monti," Portland guitarist Monti Amundson's first CD in five years, proves that he's his own man.

Amundson richly deserves comparison to the late Texas bluesrocker, thanks to a 440-volt guitar sound, telegraphic songwriting and fiery playing and singing. But the Stevie Ray box is confining because it's crammed full of players who haven't had an original idea since the flood - "Texas Flood," that is.

As "Big Monti" proves, Amundson is not one of those. "I'm afraid this album might surprise people. It's an honest record, but maybe a little too honest." The first surprise is "My American Dreams," which opens the new album and roisters out of the speakers riding a ringing "Revolver"-era Beatles riff: "What if you woke up tomorrow and everything was gone? / Living out of your SUV and told to move along"...

I've never written a political song before, but I've never been so disillusioned. I really think this country is going backwards," Amundson said. His father, who was denied veteran's benefits and faced ruinous medical bills, inspired the song. "You could do all the right things: serve your country, work hard, pay your taxes, and they could take it all away from you like they did to my father."

Then there's "Signs Of Life," with it's world-weary vocal, angelic chorus and a guitar line that ripples like pebbles tossed into a deep, dark well. It's a tremendously affecting and effective piece of music, the unflinching testament of a 47-year-old artist who, 20 years younger and leaner, ruled stages around the region and throughout Europe. Not that he's gone all arty on us; there are departures and surprising excursions into uncharted territory here, but the foundation, the crackling guitar solos, the urgent vocals, are still very much in evidence.

With the album, “Big Monti”, Monti Amundson has achieved something that I would have thought unlikely or perhaps even impossible…a new statement in American Blues.

Yes, there are echoes of great rock and blues masters that came before him present in these tracks, but what sets Monti’s tracks apart from both his predecessors and contemporaries alike is that he has somehow made them his own with his lyrics, his incendiary guitar, his humor and his honest articulation…there is no artifice here, no attempt to sound like anyone else or any particular allusion to a favorite artist.

The influences on this music are plain, but they do not render it derivative, they merely inform and place into context the artist’s statement. This is not strictly a “blues” record, per se. This is, in my opinion, a blues oriented Rock album, and a damn good one at that. It isn’t to say that there is no blues here. Songs like “Her Suitcase” give a unique world-spanning perspective on loss in the form of Tex-mex blues and “Six Shots” seems ambivalent as to whether the singer plans to drink himself to death or blow his brains out. These are heart-rending tributes to lost love, and display the fundamental push toward the blues that is evident in everything done by Big Monti.

There is also some humor evident in this context, with “Dirt Brown Duplex” taking the blues into the region of 20-something-angst. This isn’t ‘My Baby Done Left Me’ music…its something else altogether.

The record goes way beyond the blues in other aspects; there are indications here of influences that veer toward the progressive, without carrying all that top-heavy weight, but are instead well integrated into the pure blues-rock statement ultimately presented. “Signs of Life” with which Monti shares a writing credit in the name of Noel Trusty, carries a spooky, stratospheric, layered guitar hook reminiscent of both Hendrix and Pink Floyd and a mean, acid-blues telephone-EQ talking vocal, evincing a sensation of dread and loss.

The guitars on this album, all played by Monti, are raw and driven, with Stratocaster tones that range from sweetly introspective blues birdsong to over the top “brown” tones that would cause Eddie Van Halen to divorce his wife (oh yeah…never mind), and slide guitar chops that tend to pick up where Johnny Winter left (is leaving) off. Be prepared to hear what a Strat through a Marshall stack is really capable of in your sickest dreams.

The bass, drums and sparsely-utilized keys all do yeoman service to the original music here, and add very well to these recordings without attempting to carve their own path. In particular, the drums played by Portland drummer Cory Burden are solid and powerful, with well-placed fills, and are well-recorded and positioned in the mix. Also bearing mention is the outstanding and soulful blues-harp work on the song “Six Shots”.

Monti has plainly paid his dues, as evidenced by his ability to communicate the requisite “suffering” generally required of ‘blues’ artists if they are to be taken seriously. He has also amply displayed the eclectic nature of his musical influences, and his evident attention not only to the blues, but to great music in general, be it rock, blues, jazz, et al, and in the final analysis, Monti has created an ultimate act of communication in having distilled lifelong musical and life experiences into musical statements that are uniquely his.

This record is fresh, strident, and a must-listen for any fan of blues-rock.

All songs written by Monti Amundson except:
My American Dreams - Amundson/Mason
Signs Of Life - Amundson/Trusty