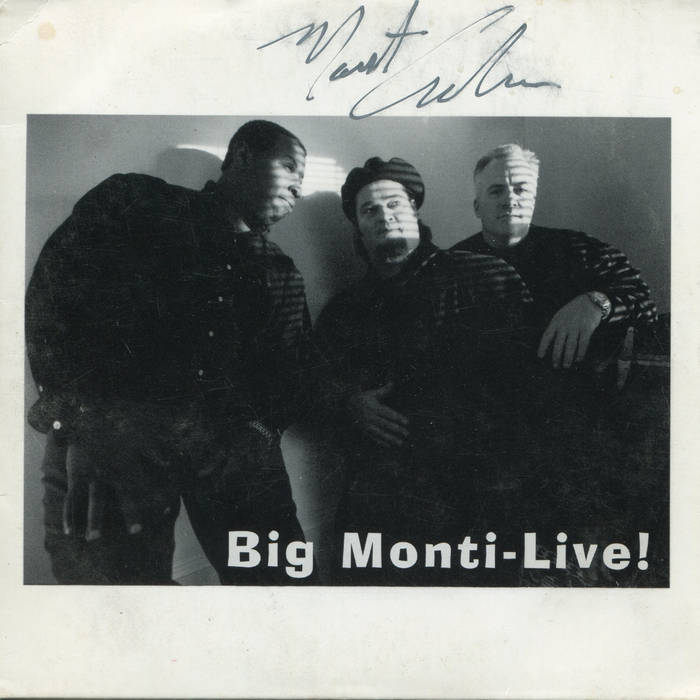 "Big Monti - Live!" wasn't really a bona-fide release. More of a demo showing just how good a rhythm section can be. We recorded two shows in two nights in Portland - I think it was "The Gemini" on Friday and "The Candlelight" on Saturday. We'd been performing a lot and unfortunately, my voice is a little rough here. Rod Stewart talks about taking care of his voice by eating cucumber sandwiches and drinking green tea while the rest of the band parties in the room next door. Probably the only reason I'm still alive is that, as a singer, I had to take a little better care of myself. For those of you who have seen me in a different state and beg to differ - I acknowledge you.

If you're lucky enough to find yourself making music with these guys, you will also find yourself being pushed to the absolute outside of Your abilities. John used to mess with me on-stage. Let's say I'm soloing over a basic 1-4-5. At some point in my solo John would just hang on the 4 for like an hour and build all this tension. I think he's going to resolve it any second so I'm playing the same lick over and over until I'm starting to get pissed off. And then I think, is this what jazzers do for fun? And just then John would resolve it and the crowd would go crazy. Ha-ha, very funny guys.

But for real - the music was expansive. On a good night I felt like I was in Cream. John Foyston of The Oregonian called it "Music that breathes."

Jeff Minnieweather? Best drummer I ever worked with. We used to shoot pool and hang out. Listen to music. He was an easy guy to be around. A lot of musicians wear you out after a while. But we continued to play together through a couple of line-up changes. He eventually moved to The Bay Area and works with whoever he wants to. Just listen to his solo on "Pilgrim". Holy shit! Is that a 7/8 time signature he's playing over?